Earlier this year, in a shocking twist, Bill and Melinda Gates announced their divorce. They have been married for 27 years. Neither party revealed the reason behind the divorce, but what everyone wants to know is how it will impact their foundation, which they build and manage together.

What will happen to the Bill and Melinda Gates Foundation which has been funding various research and movements, the most recent of which was the global COVID-19 response and distribution of COVID-19 vaccines to poor nations.

The two promised that they will continue to work together for the Bill and Melinda Gates Foundation. But, can they make it work?

Many people across the United States are in similar situations. Their spouse is the person they trust the most; why will they not create a business together? So, in the dissolution of marriage, the business gets in trouble, too. In some cases, the divorce proceedings turn so ugly that either party is unwilling to work together.

It can be avoided. Exes can work together in harmony and save their business from closing.

Divorce proceedings can be very messy. The former spouses end up fighting in court for properties and child custody. All wounds resurface. They make accusations against one another and blame each other. At the end of it, the former partners in life became exhausted, stressed, and hurt emotionally. It will be difficult to repair the relationship and be friendly for a long time.

So, perhaps, the answer is to sit down and separate amicably. Going through peaceful divorce mediation meant the parting will be as peaceful as possible. Instead of arguing in court, they discuss and negotiate what belongs to whom and how they will care for their child. The process will not leave any lasting scars because there was an agreement.

Therefore, after the divorce, exes can continue working together without bitterness or resentment.

No business between two people can survive without respect, and it is even more crucial to ex-spouses who work together.

Respect in the workplace means that the other person listens intently and speaks with kindness to the other person. Their opinion or suggestions are not discarded without serious thought and careful consideration. They treat each other like equals and with dignity.

Sadly, this will not be easy, especially if the divorce was messy. If respect was lost in the first place because of the events leading to the separation, it would not magically crop up at work. Leaving one’s personal life at the door is not possible when the source of the anger and frustrations are in the office, too. The exes will have to see each other at work every day. There has to be mutual respect as colleagues. 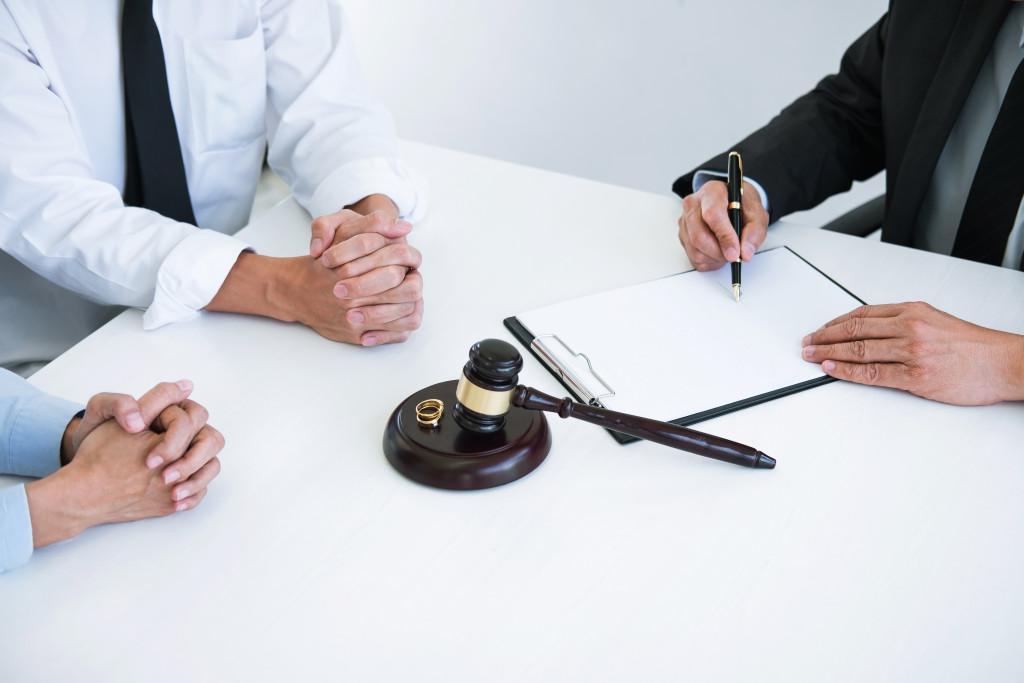 But, if the situation has not improved, it might be time to get counseling. The spouses working together have to continue seeing each other at the workplace and collaborate. If they cannot talk to each other without raising their voices or making accusations against each other, they need to speak to a therapist, or close up shop and part ways.

A therapist who can help feuding ex-spouses communicate better will help them work without conflict. They should also individually see therapists, so they can work through their emotions and, maybe, improve how they see their former partner.

A divorce is a major life event. Its impact will be felt for years. Studies have found that people who have gone through a divorce are more likely to experience increased anxiety and depression. They also are at a higher risk of alcohol abuse.

Sometimes, the partnership just cannot work out. In case ex-spouses cannot ignore their differences, it is nice to have an agreement in place that will determine a course of action.

Many business partners sign a shareholders agreement which will provide direction on what should happen when one of the owners, for any reason, decides to sell. It is best to establish it early so that bad feelings cannot influence the outcome, leaving both parties angry and frustrated.

For example, in case of a divorce, the business and life partners could agree to sell and split the revenue. They can also divide the assets if one of them wants to leave.

Having an agreement will save a lot of headache later on.

Marriages do not always end in a happy ending. The rate of divorce in the United States is quite high which means that the experience is very common. It is harder when there is business, one that they built together from the ground up, is involved. However, the partnership does not have to end after divorce. If they can work together in harmony, they can continue being colleagues at work.